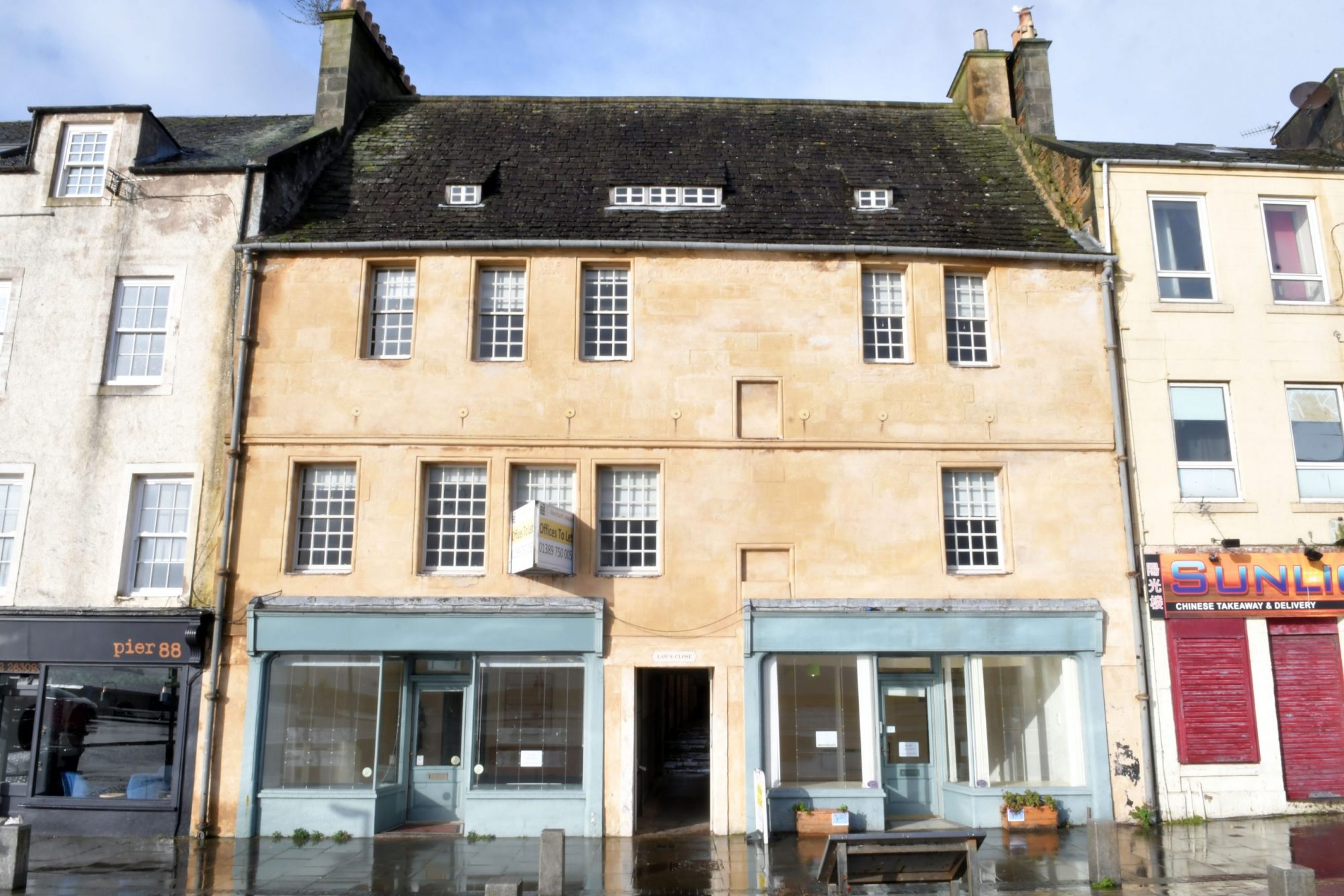 One of the finest surviving 16th-century townhouses in Scotland, when purchased by SHBT in 1986 Law’s Close had no prior history of restoration. This resulted in a series of major discoveries throughout the twenty-year project, each of which added to the building’s overall importance.

The significance of Law’s Close derives from the fact that, despite its long history, its core structure remains largely unchanged. The building as we know it today is thought to have been constructed by David and Agnes Law, who owned the site in the late 1500s. Like many other wealthy citizens of Kirkcaldy at that time, David Law was a merchant. The house’s position opposite the entrance to Kirkcaldy harbour would therefore have been both convenient and a status symbol. The shape of the site, with a narrow street frontage and long garden, is typical of a Scottish rigg plot, except that the building’s width in comparison to its neighbours marks it out as a high status dwelling.

Much of the original late-16th-century stonework survives on the exterior, whilst inside the numbered roof beams and first floor painted board and beam ceilings both remain in-situ. In addition to this, a magnificent painting of a ship survives on the second floor. With a lion rampant figurehead, it is thought to commemorate the marriage of King James VI and Anne of Denmark in 1590.

Over the course of the 17th and 18th centuries the house passed through a succession of prominent local families, many of whom were engaged in maritime activities. One particularly wealthy resident in the late 1600s undertook a lavish redecoration of the interior, with panelling painted to imitate rare and expensive materials such as burr walnut, marble and tortoiseshell, and grand plaster ceilings. The ceilings were likely created by the noted plasterer Thomas Albourn and the painted tortoiseshell decoration is an extraordinarily rare survival that demonstrates just how colourful late-17th century fashionable interiors could be.

Towards the end of the 18th century the internal stair tower was removed in favour of a central pend and external stair tower to the rear. This enabled private access to the increasingly divided building, including the two ground-floor shops and as many as five separate dwellings over the rear wings and upper floors.

In 1838, the entire site was purchased by William Balderston, who had already established a bakery in the east ground-floor shop and constructed additional outbuildings to service this, including one with a large brick chimney and three ovens. This set the tone for the rest of the 19th century, with the upper floors and one of the shops tenanted out and the rest of the premises occupied first by Balderston and then another baker, James Seath. This pattern continued into the 20th century; the bakery became a restaurant and the upper floors remained occupied, though in a gradually deteriorating state. The building was Category A-listed in 1975, but remained unexplored for a further decade.

In 1985 a student survey revealed that Law’s Close contained a significant number of 16th-century painted ceilings, which had lain undiscovered behind the 17th-century plaster ones. That same year, SHBT was established partially in order to restore the building and succeeded in purchasing the majority of the site in 1986. Further investigations revealed the remains of one of the lavish 17th-century paintwork schemes and the remarkable ship painting, thought to date from 1590.

Despite the east shop continuing to operate as a takeaway restaurant, concerns over the structural stability of the building were sufficient that a project to consolidate and restore the exterior was commenced in 1991. At the direction of Simpson & Brown Architects, the work was contracted out to individual tradesmen under the overall supervision of a ‘conservator in charge’, Rory Young.

Large quantities of cement render were removed from the façade of the building and the damaged underlying 16th-century stonework was carefully consolidated using the ‘lime method’, which at that point was still relatively new. During the project, a number of objects were discovered hidden within the walls and floors of Law’s Close, the most noteworthy of which was a 17th-century map of the Gulf of Finland. This emerged from between two floor joists – a crumpled rag half-hidden by rubble that was spotted by Rory Young and carefully retrieved. This extraordinary find emphasised the building’s participation in a historic network of international trade.

The external work was completed in 1993, the same year that SHBT acquired ownership of the east ground-floor shop. However, with the initial phase of the project now complete, additional planning and fundraising was required to restore the interior. Whilst this was developed, further archaeological and documentary research was commissioned from Kirkdale Archaeology. This was completed from 1997 to 1998. Excavations of the ground floor interior revealed the remains of an earlier street frontage and the entrance steps to the original staircase, whilst additional documentary research established David Law as the earliest known owner.

Planning permission to allow conversion of the upper floors from residential to commercial use was finally granted in 2001. This enabled the second half of the project to be completed between 2003 and 2005, in conjunction with the wider Kirkcaldy Riggs Townscape Heritage Initiative. Alan Keillor of WBS Keillor Ltd became the main contractor, again working under Simpson & Brown, and numerous specialists were brought in to help with the specific task of conserving and recreating the historic decoration.

Each section was treated individually dependant on its condition; the ship painting was consolidated by Owen Davidson, whilst the painted decoration on the first floor was substantively recreated by Mike Pryor and Mark Nevin. Further discoveries included one of the earliest known depictions of the burgh arms of Kirkcaldy on the ground floor and an additional section of 17th-century painted decoration on the second floor. The latter was carefully recorded by the artist William Kay before being covered over with thin sheets of plywood and replicated. This allowed the full impact of the original scheme to be experienced, whilst the original paintwork remained untouched.

The interior work was complemented by separate garden project, led by John Richards Landscape Architects. The space was redesigned to accommodate community gatherings and outdoor performances, with a series of productive trees and shrubs reflecting the garden’s original purpose.

The site was officially re-opened in September 2005 by Gordon Brown as MP for Kirkcaldy and Cowdenbeath. In total, the project took almost 20 years and cost £1.3 million. Funders included: Historic Scotland, Heritage Lottery Fund, Scottish Enterprise Fife, Fife Environmental Trust, European Regional Development Fund, Fife Council, Society of Antiquaries of Scotland, The Russell Trust, Architectural Heritage Fund and The Dunard Trust. Upon completion of the project, the building was renamed Law’s Close, a slightly more memorable and characterful title than 339-343 High Street and one that reflected its newly-discovered origins.

Law’s Close continues to be owned and managed by SHBT, with the ground floor rented out as retail space and the upper floors a series of office suites, each with its own unique features. The garden is tended by a dedicated group of volunteers and is open to the public throughout the week. Interpretation boards explaining the development of Kirkcaldy, the site and the SHBT project are on display in the rear courtyard, allowing both tourists and locals to engage with this remarkable building and with the wider history of the town in which it sits. 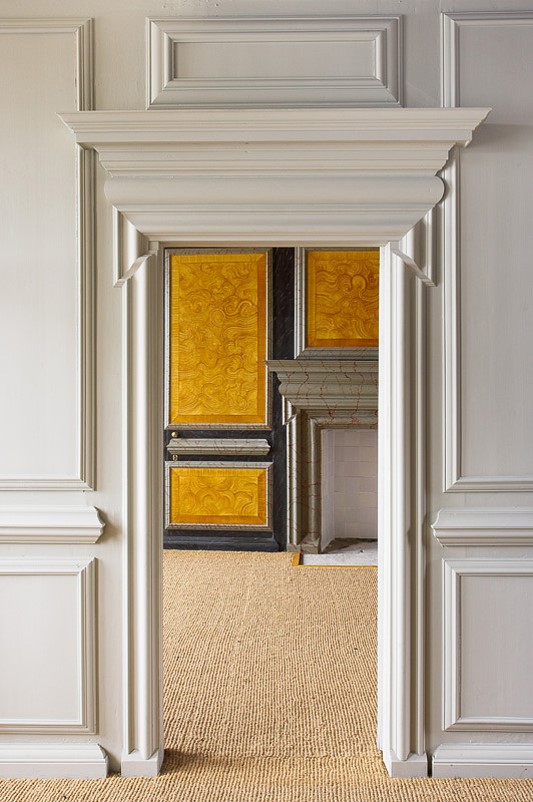 Go on a journey through history with John Lowrey from the University of Edinburgh and enjoy the remarkable spaces and stories of Law’s Close.