Giving new life to Riddle’s Court, a 16th-century courtyard residence in the heart of Edinburgh’s Old Town, was in many ways the largest and most complex projects ever undertaken by SHBT.

Located at the top of the Royal Mile, and only a short walk from Edinburgh Castle, the history of Riddle’s Court extends back into the Medieval Era. However, the building as we understand it today was amalgamated and rebuilt by Baillie John McMorran in the 1590s. Its purpose was to be a high-status, multiple-occupancy dwelling, providing its residents with privacy as well as the convenience of a central location.

Its grandeur when first built is evidenced by the fact that it was the town residence of the Lord Provost of Edinburgh, and later Lord Chancellor of Scotland, Alexander Seton and in 1598 played host to a grand banquet attended by King James VI and his wife Anne of Denmark. It became known as Riddle’s Court after 1726, when George Riddell purchased and reconstructed the part of the site facing the Lawnmarket.

Like many other properties in the Old Town, the status of Riddle’s Court declined during the late 18th century when its wealthy residents moved to the newly-built and more spacious New Town. In the 1830s, the southern-most parts of the building were demolished and its façade reconstructed to bring it in-line with the new Victoria Terrace, commissioned as part of the 1827 Edinburgh Improvement Act.

Further parts of the building were demolished in the 1890s by Patrick Geddes. Geddes was a true polymath – a biologist and sociologist as well as a philanthropist, educator and town planner. His work at Riddle’s Court was motivated by his principle of ‘conservative surgery’, which aimed to preserve the most historically significant parts of Old Town buildings by demolishing the more dilapidated parts, making what remained more hygienic and suitable for modern living. Patrick Geddes converted the main part of Riddle’s Court into one of Edinburgh’s first student halls of residence. His motto ‘Vivendo Discimus’, ‘By Living We Learn’, remains carved over the entrance to the inner courtyard, a sign of how his educational philosophy continues to influence the use of the building and SHBT’s wider approach to learning.

Geddes’s attempts to rejuvenate Riddle’s Court were short-lived, and during the early 20th century the building reverted to its use as small, private dwellings. In 1946, the site was purchased by City of Edinburgh Council who oversaw its renovation in the 1960s and discovered the medieval painted ceiling in the north block. From 1951, Riddle’s Court became a regular venue of the Edinburgh Fringe Festival and in 1973, the headquarters of the Workers Educational Association.

In 2005, as the building once again fell into disrepair, the WEA sought to raise awareness of its plight and historical importance. Their call was answered by SHBT, who in 2008 completed a Feasibility Study for the building and were subsequently granted a 99-year lease by City of Edinburgh Council in order to restore the building and oversee its subsequent use.

The aim of the SHBT project was to revive Riddle’s Court and provide it with a sustainable future. This meant not only repairing and restoring the historic structure and precious elements of the interior, but adapting the building for 21st century use. This included the installation of a lift, allowing accessibility across the building’s four storeys. To successfully implement the project, over £6 million was raised and invested into Riddle’s Court. This sum was composed of large grants from the Heritage Lottery Fund, Historic Environment Scotland, the Architectural Heritage Fund and the Monument Trust, as well as many other contributions from trusts, foundations and private individuals. The building was re-envisaged as an educational venue, with rooms available for hire as office and event space and a holiday-let, all of which support the building’s use as the home of the Patrick Geddes Centre for Learning.

LDN Architects led the Design Team with John Dennis appointed as Main Contractor and on-site works began in 2015. Large quantities of cement render, installed in the 1960s, were removed from the exterior and the building was re-harled in a traditional lime mortar. Inside, the discovery of additional 16th-century painted beams and a huge medieval fireplace necessitated further re-planning.

The many historic ceilings were painstakingly restored and their surrounding rooms either modernised or restored depending on the individual circumstances. For instance, the 19th-century panelling in the Geddes Room was painted to look as it would have done when used as the students’ dining room in the 1890s, a decorative choice consistent with its painted ceiling of 1897. In contrast, the newly named ‘King’s Chamber’, with its colourful late-16th-century board and beam ceiling, was reimagined as one of the most characterful bedrooms in Edinburgh and the centrepiece of a unique holiday-let. At the heart of the building, a light-filled lobby space with a new glass elevator and matching glass roof was created, which looked towards the building’s future even as its 400-year history was revealed on the surrounding walls.

After the project’s completion, Riddle’s Court was officially re-opened by HRH Prince Charles, the Duke of Rothesay in September 2017. It remains in use as a centre for learning, event space and festival venue and occupies a position of primary importance within SHBT as our headquarters. To find out more about visiting Riddle’s Court or hiring one of building’s unique spaces, visit our dedicated building page. 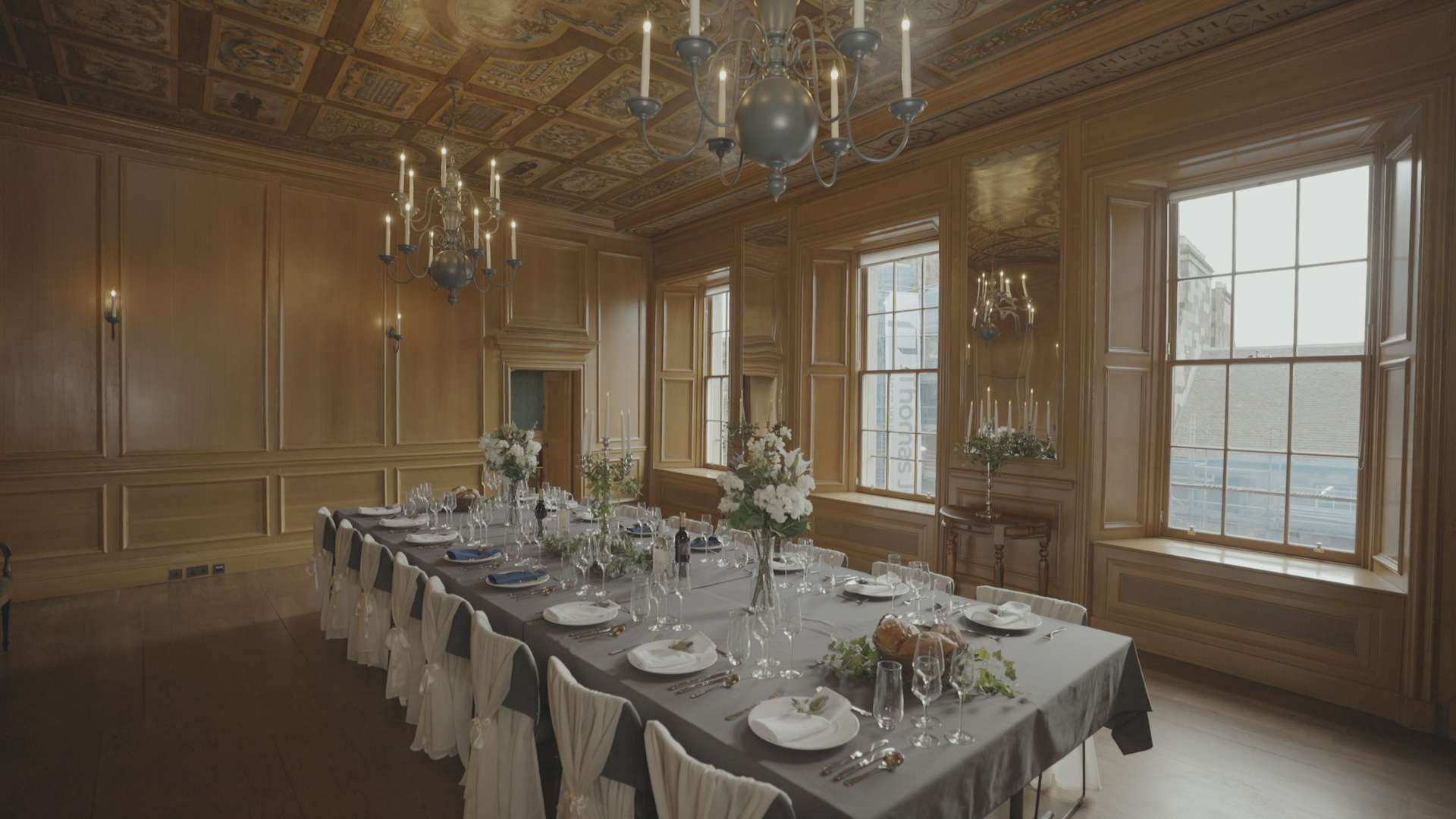 A Historical Guide to the Rooms at Riddle’s Court

Find out more about the vibrant history of the rooms at Riddle’s Court in Edinburgh.

Watch this short film to experience a behind-the-scenes view of the restoration project at Riddle’s Court.

Discover the main spaces and stories of this newly-restored 400-year-old building with our CEO Una Richards.